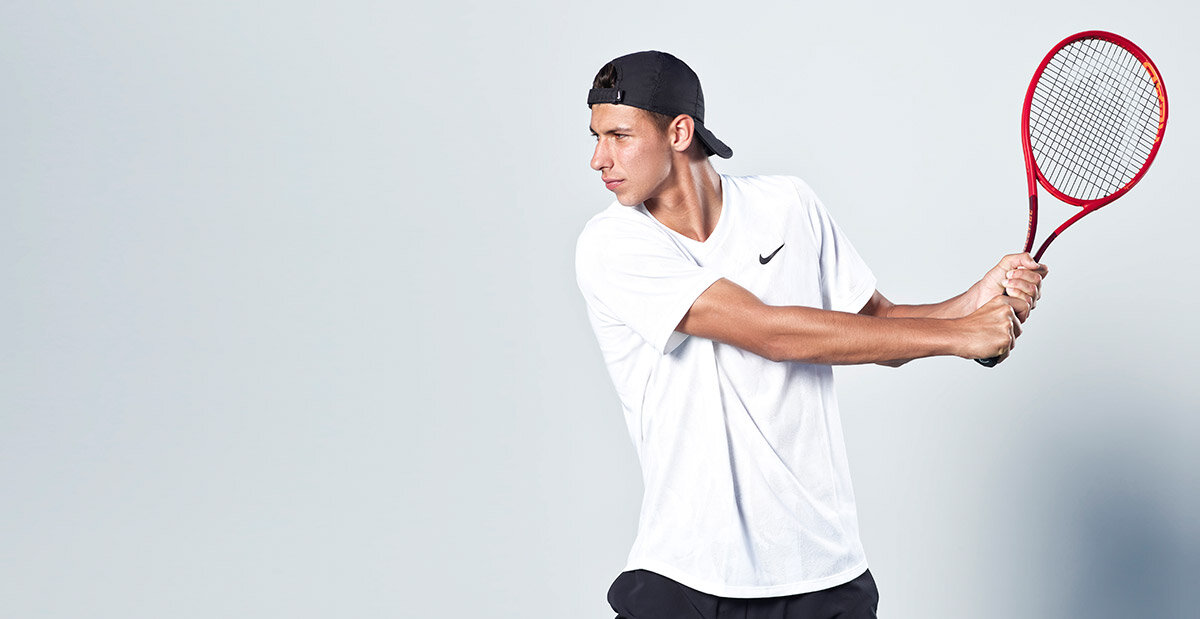 Australia has a great tennis tradition, and its next standard-bearer could be Alexei Popyrin, the son of Russian emigrants to Sydney who is now based part of the year in Spain. Craig Gabriel talks to Popyrin.

At close to two metres tall and wielding the Head Prestige racket which he picked up eight years ago – ‘and haven’t looked back since’ – Alexei Popyrin can seem imposing, but in fact he is softly spoken and is quite shy.

Yet beneath this quiet exterior burns great determination – an attribute he believes can take him right to the top.

Popyrin highlighted his talent in the juniors when he won the French Open junior title in 2017. He ended his junior career with 17 consecutive match wins and was ranked second in the world. It is all a far cry from when his mother introduced him to tennis at the age of three and he started playing in the garage. When his father’s job took the family to Dubai when Alexei was eight, he continued his progression there, and from 10 was based in Alicante alongside another Australian Alex di Minaur. With Russian parents and his time in Spain, Popyrin flips easily between English, Spanish and Russian.

Despite his storming finish to his junior career, Popyrin found climbing the tennis ladder hard. It took him a little while to get going on the full tour, but he broke into the top 100 in June 2019.

Like with so many players on the tennis circuit, the pandemic has thrown up some challenges for Popyrin. However, if there is a consolation to the situation, it has allowed him to spend extra quality time with family and friends – and when you are from Australia, not much is close, so it’s not a matter of just popping over for the weekend to catch up with siblings and friends.

‘Travelling and being apart from the people I love most of the year is one of the toughest aspects of our life in tennis,’ Popyrin said. ‘I think the stage that I’m in with my career means I need to play a lot of tournaments, and that means I have to travel a lot. I hope once I make it to the top, it’ll be easier.

The 2019 season was the first breakthrough for the Sydneysider who turned 21 on 5 August this year. He qualified for main draws a record equalling 10 times including two ATP Masters 1000s and Wimbledon. In 2019 he won a main draw match at each of the four majors and, as a wild card, he upset eighth seed Dominic Thiem to reach the third round of the Australian Open.

His performances at the Australian Open have been the biggest thrills so far in his young career. Two years running he has made the third round and getting to play on the fabled Rod Laver Arena in 2020 certainly added an extra spring to his step. In 2021 Alexei Popyrin stormed back from a set down to beat Alexander Bublik 4-6 6-0 6-2 and clinched his first ATP Tour title at the Singapore Open.

Win or lose, the five set matches he has played are perfect evidence of that drive, while a typical day will see him at the gym a couple of times for an hour each and two on-court practice sessions of two hours each.

Tennis’ fortune is football’s misfortune (soccer). He played both sports growing up, but at the age of 10 he decided to concentrate on tennis. Nonetheless, his overall love of sport will see him watching it or playing a sports game on PlayStation.

‘I grew up watching a lot of Delpo (Juan Martin Del Potro), (Jo Wilfried) Tsonga and Fernando Gonzalez, so I tried to base my game on theirs,’ Popyrin said, ‘but if I could meet anyone I would love to meet Australian international Tim Cahill, he was my idol growing up and my favourite football player.’ When time permits, he loves to watch shows; he is not the biggest movie guy and musicwise it is pop or rap for him. And if a getaway is needed to recharge the batteries, he will head somewhere ‘hot and beachy’ with his girlfriend.

‘I’m a very hard working but relaxed person on the court and I would say I’m pretty introverted off the court. Sure it’s pretty frustrating when I miss an easy shot on an important point during a match, but I think my character is my biggest strength and it’s pretty hard for me to get down on myself or on anyone,’ he said.

Alexei Popyrin certainly seems to have the work/life balance right, and that could mean he has a long and successful career ahead of him.