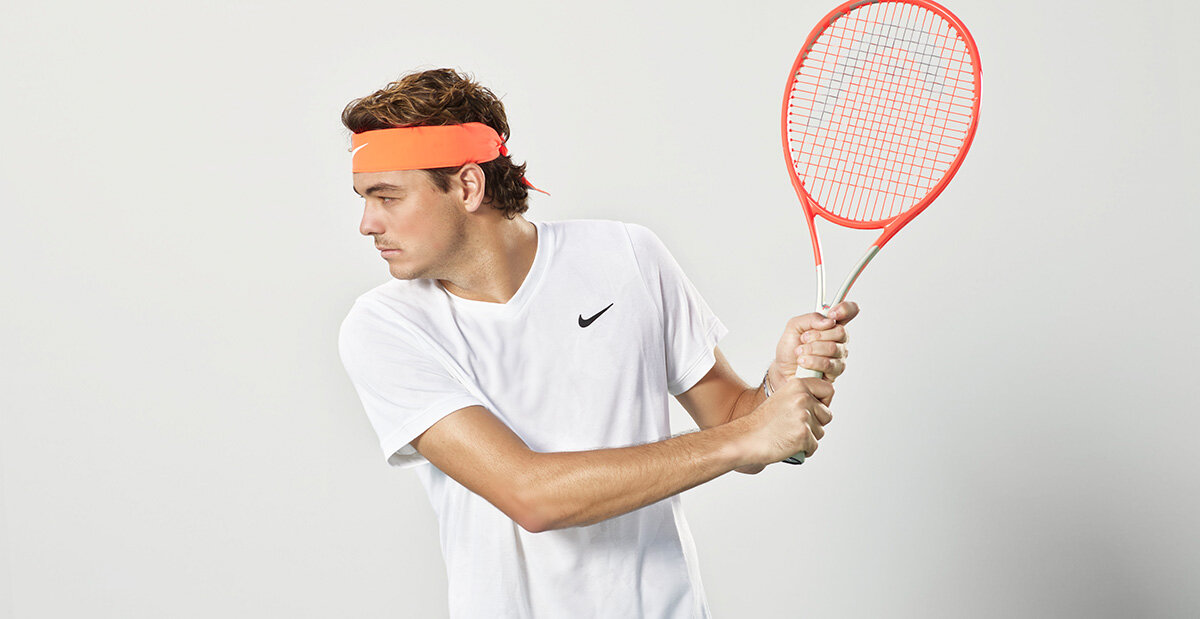 Despite his young age, he already plays a major role on the ATP tour. Without winning any significant titles so far, he recently jumped on position 54 of the singles-ranking (2016) which makes him a potential top player of the future.

Taylor Fritz heads an exciting young generation of American players. Richard Evans looks at the pedigree and mentality of a man who looks destined for the top.

How tall is Taylor Fritz?

Seeing Taylor Fritz in the world’s top 30, something that has become the norm over the past year or so, feels about right. It’s sort of what you might expect of a strapping 1.94m (6ft 4in) athlete who happened to have a mother, Kathy May, who was ranked in the world’s top 10 in 1977 and a father, Guy Fritz, who played on the ATP tour and is now the Olympic Development coach for the USTA. Having a racket put in his hand at the age of two probably helped as well.

Since that moment young Fritz has had as good advice on to how to play a difficult sport as anyone could hope for – not just from two sensible and obviously qualified parents, but from two of the game’s best coaches, David Nainkin and Paul Annacone.

South African-born Nainkin, who has coached Mardy Fish, Sam Querrey and Sloane Stephens, and Annacone, who has Pete Sampras and Roger Federer on his resume, are close friends and live within driving distance of Fritz’s home town of Rancho Palos Verdes near San Diego in southern California.

It was about three years ago that the two coaches decided they didn’t want to travel 35 weeks in the year, so Annacone offered to split some of the time on the road with Nainkin. By then there was no doubt that Fritz could become a big player. In 2015 he won the US Junior title and was declared World Junior Champion by the ITF. The following year, he became the youngest American since Michael Chang in 1988 to reach an ATP final when he powered his way through the Memphis draw before losing to Kei Nishikori. That lifted him into the world’s top 100, and in 2017 he scored his first major victory by beating the former US Open champion Marin Cilic at the BNP Paribas Open at Indian Wells.

By then, Annacone had joined the team and quickly noted how mature Taylor was emotionally – more so than physically. ‘He was growing fast and needed to bulk up, but mentally he was incredibly good,’ Annacone says.

Maturity comes in many forms and does not exclude a romantic heart. At 18, he proposed to Raquel Pedraza, a pro player herself, under the Eiffel Tower. By July 2016 they were married and little Jordan’s emergence in January the following year made Taylor a 19-year-old father. Crediting his young wife’s parenting skills for allowing him to continue to concentrate on his game, Fritz celebrated fatherhood by winning his first ATP title over Sam Querrey, an American of an older generation, on grass at Eastbourne just before Wimbledon 2019.

Although brought up on the hardcourts of California, Fritz’s power game transfers naturally to grass and, according to Annacone, the Head Graphene 360 RadicalMP racket that has been in his hand for most of his career plays a big part in that. ‘It’s light and tight,’ says Annacone, referring to the weight and Head’s tight string pattern. ‘It offers the perfect balance between power and control.’

Proving his liking for grass, Fritz followed up by beating the veteran Czech Tomas Berdych in straight sets at Wimbledon and then, returning to America for the summer hardcourt season, boosted his ATP ranking by reaching the final at Los Cabos and Atlanta. That made him, at the age of 21, the youngest American to reach the world’s top 25 since Andy Roddick in 2004.

That emotional maturity Annacone had identified came to the fore when Fritz was selected for the Rest of the World Team in the Laver Cup in Geneva. He outhit world No 4 Dominic Thiem 10-5 in a third set Super Tiebreak, earning himself a mobbing by John Isner, Nick Kyrgios and other members of his struggling team. The win couldn’t prevent the powerful Europe team from retaining the Laver Cup, but it affirmed Fritz’s ability to handle the pressure of playing for a team in front of a packed stadium of 7,500 fans.

Fritz followed that four weeks later by beating another top tenner, Sascha Zverev, in Basel. The new, but soon to be bedeviled, year of 2020 started brightly for him as well when he outfought the two time Grand Slam finalist Kevin Anderson from two sets down, 4-6, 6-7, 7-6, 6-2, 6-2 in the second round of the Australian Open to score the most dramatic and satisfying win of his career.

Having lost to him at the US Open, Fritz found himself facing Thiem again in the third round in Melbourne but he couldn’t repeat his Laver Cup success and went down in four sets. But he received accolades from his opponent. ‘Our meetings have been very tough,’ said Thiem. ‘I got pretty lucky in the second set, saving six set points. His first serve is unbelievable and for sure he will get better. He has very solid ground strokes and perhaps the only thing he could improve is his second serve.’

Annacone recognises the power of the first serve, which Taylor Fritz likes to bang down at 140 mph, but emphasises the need for judgment. ‘Where to serve, when to kick, when to slice – these things come with experience. But Taylor is very sure how he wants to play and has his own set of beliefs. As coaches, he tests us, asking questions, challenging assumptions. Like so many top players, he can be stubborn and opinionated, but it’s all because he is determined to improve.’

Annacone is happy that Fritz is growing up with a group of highly promising young Americans that include Frances Tiafoe and two of his special buddies, Tommy Paul and the giant Reilly Opelka. ‘I always like groups of competitive friends who can push each other to do better.’ He says. ‘It hastens the process. Taylor is very driven and is at the front of a very promising generation.’