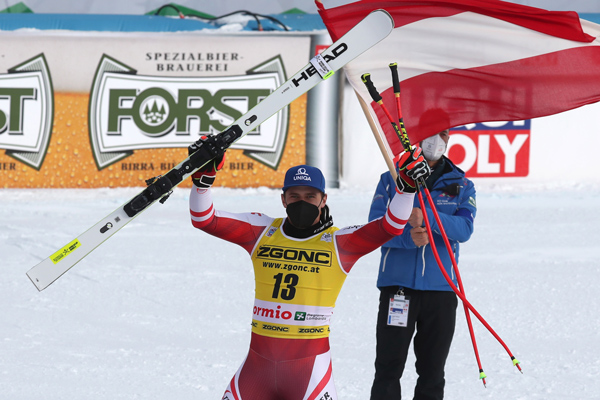 Mayer and Kriechmayr celebrate double victory on the Stelvio run

A sensational end to the year for the HEAD World Cup Rebels in the Downhill in Bormio: Matthias Mayer and Vincent Kriechmayr secured a double victory in the last race of 2020 on the challenging Stelvio run on Wednesday. The day before Kriechmayr finished second in the Super-G in Bormio, his first podium finish of the season.

The two Austrians fought a thriller of a race in the Downhill. In the end Matthias Mayer crossed the finishing line just four hundredths of a second ahead of his compatriot. For Mayer it was his first victory in Bormio, his sixth in a Downhill and his tenth World Cup win overall.

"That was a great run for me. It was different to ski than during training. A few places were easier, a few were more difficult. I gave it everything I had from start to finish. In the end it was a very close race to within four hundredths of a second," said a delighted Matthias Mayer at the finish. "For me the run was much easier to ski than during training. The light was also good, which is probably why it was such a close finish," said Vincent Kriechmayr.

"That was an awesome way to finish the year," said HEAD Racing Director Rainer Salzgeber. "It went perfectly for us. Unfortunately Beat Feuz made a mistake that put him out of the race for the podium. Our team did a great job. Vincent Kriechmayr races with a slightly different plate. That means he doesn't have as many skis to choose from, and make things a bit more challenging for him." Vincent Kriechmayr was already back on track for success in the Super-G on Tuesday. The Austrian athlete raced to the podium for the first time this season in second place. It was the 16th podium finish in the World Cup for the 29-year-old, and his eleventh in the Super-G.

Previously, Maria Therese Tviberg had never notched up a World Cup point in Slalom. On Tuesday in Semering, the Norwegian athlete finished in eighth place with bib number 54 to land among the world's best. After the first run the 26-year-old was in 23rd place. With the third-fastest time on the second run Tviberg climbed another 15 places. The best HEAD Rebel was Swiss athlete Wendy Holdener in fifth place. Marta Rossetti from Italy finished in eleventh place, Lena Dürr from Germany and Sara Hector from Sweden shared 13th place.