Djokovic the history man closes in on Golden Slam

Novak Djokovic has once again proved he is not just the best tennis player in the world, but a real history man. HEAD’s leading racket ambassador has written another massive piece of tennis history with his victory at Wimbledon on Sunday – and he has completed three steps out of five towards the first ever men’s Golden Slam.

Djokovic’s 6-7, 6-4, 6-4, 6-3 win over Matteo Berrettini in the third Grand Slam tournament of the year takes the Serb to six Wimbledon titles and 20 majors, putting him on level terms with Roger Federer and Rafael Nadal who now all have 20. But in this Olympic year, Djokovic remains on course to win a Golden Slam – the Grand Slam of tennis’s four majors, plus the Olympic gold medal, in the same calendar year.

Having won the Australian, French and Wimbledon titles, Djokovic is 60 per cent of the way there. He leaves London for Tokyo where he hopes to pick up his first Olympic gold medal (he was a bronze medallist in Beijing in 2008), and then there would be the US Open in New York in early September to complete the job.

Debates about the greatest player of all time will continue to rage, but Djokovic’s current form suggests he could put himself above his rivals, certainly numerically. One more Grand Slam title will take him to the highest-ever total for a man in history, and he could even beat the women’s record of 24 held by Margaret Court, or the marks set by Serena Williams (23) and Steffi Graf (22). He is already the record-holder for the most weeks at the top of the rankings, and with Wimbledon marking his 85th tour-level title, even Jimmy Connors’ record of 109 titles may not be safe from the HEAD-wielding history man. All this after bouncing back from missing the second half of 2017 with an elbow problem that needed surgery in early 2018.

“I think that experience definitely favours me every single time,” Djokovic said at Wimbledon, “knowing that I've been through everything that I could possibly go through as a tennis player. I know my strengths. I know what I'm capable of. I rely on that. Obviously it's not a guarantee that when you are in a difficult situation you're always going to find a way, but at least you can rely on the things that you know work for you.”

Djokovic’s Wimbledon triumph is all the more remarkable because he had to play back-to-back four-hour 11-minute matches to win the French Open last month, beating Rafael Nadal and Stefanos Tsitsipas in draining contests. Then with just two weeks between Paris and Wimbledon because of calendar adjustments forced by Covid-19, Djokovic managed to recharge his batteries to be almost unchallenged at Wimbledon.

He lost his first set of the tournament to the British wildcard Jack Draper, but after that blip he stormed into the final, showing remarkable defensive qualities to beat Denis Shapovalov 7-6 7-5 7-5 in a high-quality semi-final. He then used his form and experience to get the better of Italy’s Matteo Berrettini in an all-HEAD final, Dokovic’s Speed racket winning out over Berrettini’s Extreme.

In the history of men’s tennis, the next most successful Grand Slam titleist is Pete Sampras on 14 (six behind Djokovic, Federer and Nadal), followed by Roy Emerson on 12. Since the ‘Golden Slam’ became available with tennis’s return to the Olympics in 1988, only Steffi Graf has achieved the feat, winning all four majors plus the gold in Seoul in 1988. 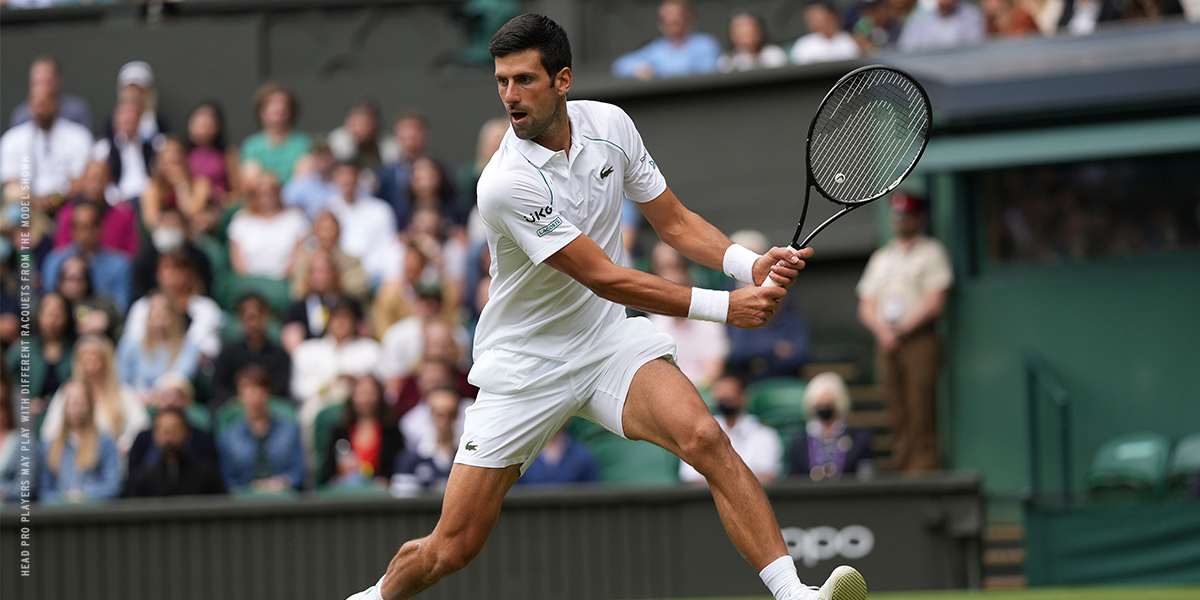