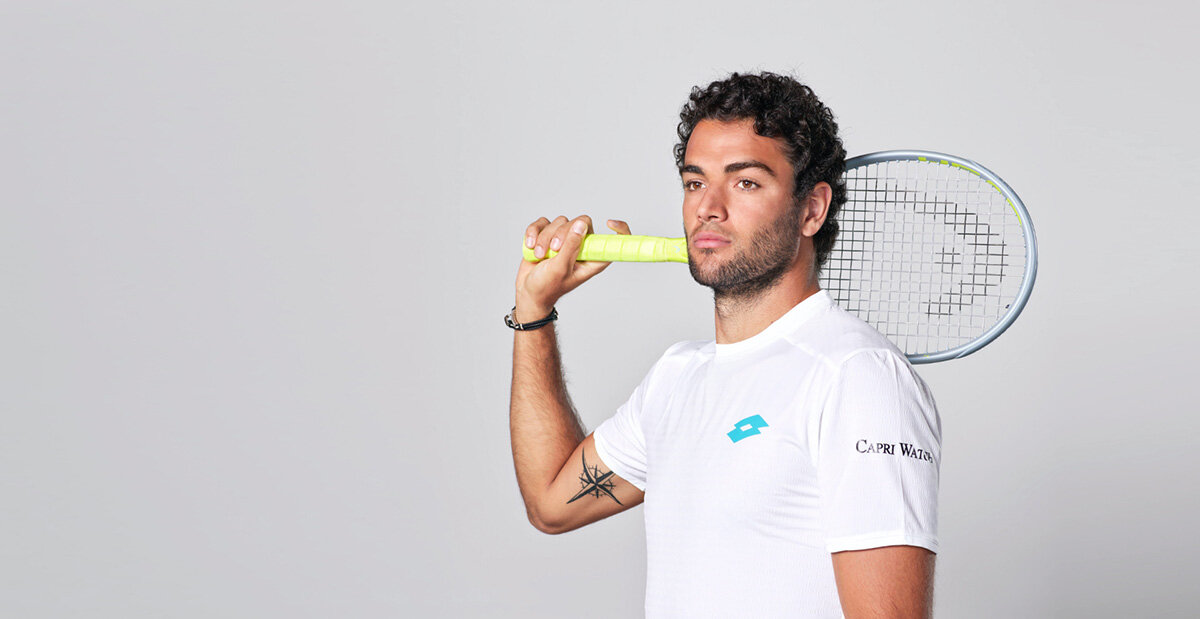 Not everyone finds stardom easy to handle, especially when it is thrust on you suddenly at an early age. Since July 2018, fame has fallen on the shoulders of Matteo Berrettini, and he has worn it well.

This is how Matteo Berrettini made it into the Top 10

We have arranged to meet at the Chris Evert Academy in Boca Raton, Florida, where the player ranked eighth in the world has been residing since the beginning of the coronavirus lockdown. The time we set was 10.00am. At precisely that hour, Berrettini drives in to the parking lot, greeting me with an easy smile. A punctual tennis player!

I suggest we walk over to where there some seats in the shade. ‘Sure,’ he replies and, distanced two metres apart, Berrettini begins telling me about his life in fluent English. If his powerful game is intimidating for opponents on court, the opposite is true for those who keep his company.

'He is a gentle young men'

‘He is a gentle young man,’ Chris Evert told me as we chatted just before his arrival. That much is quickly evident. Smiling, he recounts how his parents first put a racket in his hand at the age of three. ‘My whole family played tennis. My parents were members of a tennis club in Rome but at first I didn’t really love it that much and I tried other sports like judo and swimming. But when I was eight my little brother Jacobo, who was already playing tennis, told 07:18:09me “Come back. Try again. You’ll like it.” And so I did and I never stopped.’

At the age of 14, Berrettini began training at another club in Rome so he could work with Vincenzo Santopadre, a former ATP tour player. And he has been with him ever since. ‘It’s been 10 years now,’ Berrettini says with a smile of satisfaction.

Handling a young player in today’s high pressure age is all about gauging the pace of his development. Too often, either coaches or parents are too anxious for early success. Santopadre ensured that did not happen with young Matteo. While contemporaries spent long hours on court every day, Berrettini’s coach recognised that the teenager was not ready, either mentally or physically, for the demands of the tour.

Encouragement from a notable source had come five years before when Adriano Panatta, Italy’s most celebrated player who won the French Open in 1976, watched Berrettini play and told him he would be able to serve at 220 km/h when he grew. ‘I said “You sure about that?” because I was skinny at the time, but Adriano said I had a loose arm and a good motion, and he was right.’

How tall is Matteo Berrettini?

So right, in fact, that when Berrettini made his first breakthrough on the tour in July 2018 he did so by winning the title in Gstaad without dropping serve. At altitude, the delivery was all the more lethal, even on clay, and it helped him win the doubles too, in partnership with Daniele Bracciali. By then he was a strapping 1.96m (6ft 5in) athlete wielding a Head Extreme racket, the weapon he chose back at age 12 when his club, which had a contract with the Austrian company, offered him the choice of two models. ‘I chose the more powerful Extreme because it suited the way I wanted to play. I have always been an aggressive player.’

Berrettini’s next step up began early in 2019 when he was chosen for the Italian Davis Cup team drawn against India in Kolkata right after the Australian Open. The tie was played on grass, which Matteo discovered was a surface that suited his aggressive game – and his famous yellow racket. Berrettini set Italy on the path to a 3-1 victory by overpowering Prajnesh Gunneswaran 6-4 6-3.

The confidence derived from that performance served him well when he next played on grass in Stuttgart just before Wimbledon. In the final he beat the talented Canadian Felix Auger-Aliassime and, just like in Gstaad, blasted his way through the tournament without losing serve. By then he had added another ATP title by winning in Budapest which had boosted his confidence in an even more important way than hitting aces.

‘I had lost in the first round at Indian Wells and Miami and then again at Monte Carlo, which was really disappointing,’ he revealed. ‘I hadn’t been enjoying my tennis for some reason and I realised something needed to change. So we had a big meeting with my team and I listened, especially to my mental coach, and it helped a lot. I was able to go to Budapest the next week with a different attitude and win the title!’

'Thanks for the lesson! How much do I owe you?'

At Wimbledon Berrettini progressed to the fourth round with a hard fought five-set battle against Argentina’s Diego Schwartzman, but then ran into Roger Federer and was rushed off court in 74 minutes. Unused to the unique atmosphere of the Centre Court, the young Italian was never in the match but retained his sense of humour. As they shook hands at the net, Matteo grinned at the great champion and said, ‘Thanks for the lesson! How much do I owe you?’

‘I learn a lot from my victories but even more from my defeats,’ he said, revealing the kind of attitude that takes a player a long way. He made another big step forward at the US Open when he beat Gael Monfils on a fifth-set tiebreak to reach his first Grand Slam semi-final. Suddenly he was in the world’s top 10.

With the teenaged Jannik Sinner also showing great promise, Italian tennis seems well placed to deal with whatever the uncertain future holds. ‘We are not used to being in one place for long,’ says Berrettini who spent the lockdown with his girlfriend, WTA tour player Ajla Tomljanovic, in Boca Raton. ‘But we must be grateful for what we have. So many people are having a much more difficult time.’