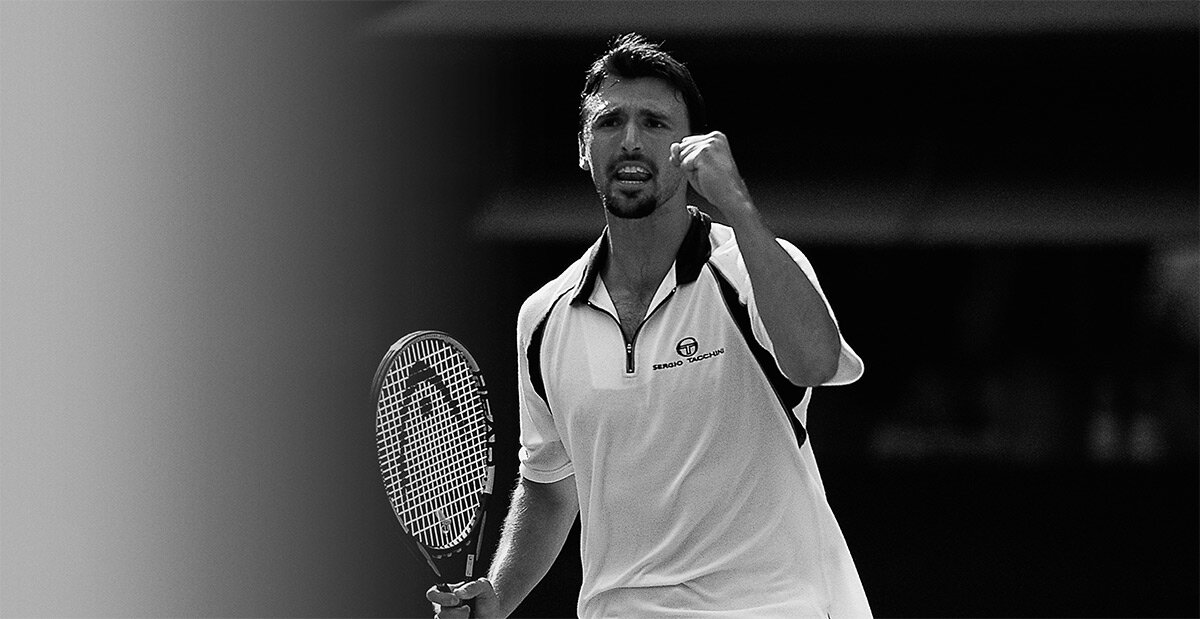 Goran Ivanisevic isn't famous for numerous successes on the ATP Tour but there is this one speciality he could always rely on - the serve. The moment he reached unknown fame has been the Wimbledon final in 2001, when the "Master of Aces" won the title even though he could just enter the tournament by receiving a Wildcard. This moment still belongs to the most popular moments of sports history.

Sometimes called the ‘Split personality’ in a joke based on the city of his birth, Goran Ivanisevic could delight and frustrate in equal measure. But as Chris Bowers reports, the high point of his career was one of the greatest Grand Slams ever won with a Head racket.

If you had to pick the top 10 most emotional moments in tennis, the Wimbledon final of 2001 would have to be one of them. It was the most glorious moment in the career of the colourful, erratic, lovable, and intensely frustrating Goran Ivanisevic.

Most people thought Ivanisevic’s career at the top was over. He had been runner-up at Wimbledon twice before. In 1992, he was tipped to beat the unlikely grasscourter Andre Agassi, but the fates were with Agassi, who won in five sets. In 1998, Ivanisevic ran into Pete Sampras at the height of his Wimbledon domination – if Ivanisevic held his serve, he had a chance, but after losing the first two sets on tiebreaks, the game was up and Sampras won in three.

The Croat’s last visit to Great Britain before his triumph at Wimbledon in 2001 had ended in ignominy. He was at a tournament in Brighton in November 2000, playing the Korean Hyung-Taik Lee. He had only three of his Head Prestige Classic 600 rackets in his bag, he smashed all three, and was defaulted early in the third set for ‘lack of equipment’.

By the time Wimbledon came round, Ivanisevic’s ranking had slipped to 125. That wouldn’t get him into the draw, he would have to qualify. But, as a two-time finalist, Wimbledon saved the 29-year-old left-hander from the qualifying tournament by offering him a sentimental wildcard. It was a decision that would make history.

As an unseeded player, Ivanisevic had a tough run-in. He beat Andy Roddick in the third round, Greg Rusedski in the fourth, and Marat Safin in the quarter-finals. But then he faced the home favourite Tim Henman. Because of rain, the semi-final took three days to complete. Not that Ivanisevic will complain, because the rain saved him.

After taking the second set on an 8-6 tiebreak, Henman seemed to have broken the back of the match. He raced to a 6-0 third set with Ivanisevic looking lost. But then came the rain again. Ivanisevic regrouped, and won the fourth and fifth sets to break British hearts.

Because of the rain, the semi-final finished on the Sunday, and the final took place on the Monday. It meant there were no pre-sold tickets, and Wimbledon’s centre court had an atypical people’s crowd. With two immensely popular finalists in Ivanisevic and Patrick Rafter, the atmosphere was uncharacteristically sizzling.

When Ivanisevic led by two sets to one, he seemed in control. But then at 3-2 in the fourth, he was footfaulted to deprive him of an ace, and he then double-faulted to give Rafter a decisive break. He could so easily have unravelled, but he pulled himself together in the fifth set. At 7-7 he broke Rafter, and was suddenly serving for the match.

He was so nervous, he could barely hold his racket. He decided to go for even bigger serves than normal, and got to Championship Point. He was so emotional he had tears in his eyes; he prayed to the skies – and double-faulted. He then double-faulted on a second match point. On his third he played a little safer and saw a sublime Rafter backhand lob sail over his head. On his fourth, Rafter netted his return, and Ivanisevic crashed to the sacred turf in tears of joy.

He was the first and only wildcard ever to win a major singles title, and numerous tennis fans cite that victory as one of the most emotional in the history of the sport.

Born in September 1971 in Split, then Yugoslavia, Goran Ivanisevic was always a great prospect, though always wayward. Even as a junior, he caused problems. Jelena Gencic, the woman who taught Novak Djokovic how to play, once had Ivanisevic and Monica Seles on a Yugoslav junior touring team. She said she and Seles generally tamed the wild child but not always. Gencic forced him to run punishment laps after he ripped the head off one of Seles’ dolls, and he was disqualified from the European under-14 championships for smashing his racket.

A life-long Head player, Ivanisevic was given his Davis Cup debut at 16, partnering Slobodan Zivojinovic against Boris Becker and Eric Jelen. The Yugoslavs had a match point in the fourth set, but the West Germans won, indeed they won the cup that year, but Ivanisevic had put down a marker.

He might have won the Davis Cup in 1991, if Yugoslavia hadn’t started its dramatic and tragic descent into four civil wars. He, Zivojinovic and Goran Prpic had seen the Yugoslavs into the semi-finals, but Ivanisevic and Prpic were proud Croats, they refused to play for Yugoslavia anymore, and the new republic of Croatia had to start in the bottom group of the Davis Cup in 1992.

The year of his first Wimbledon final was Ivanisevic’s most consistent period. He won four titles in 1992, and after losing to Agassi his ranking was at a career-high two. He won five more titles in 1996, but after falling to Sampras at Wimbledon in 1998, his career fell away. He became more mercurial, seemingly ill at ease with himself, and by the time he arrived at Wimbledon in 2001, many thought a major title was beyond him. Some labelled him ‘the best player never to have won a major’ – until his triumphant People’s Monday at Wimbledon.

His career faded after that moment of glory, but there was still one more trophy to come. In 2005, Ivan Ljubicic had the year of his life, playing outstanding tennis – in singles, and in doubles with Mario Ancic – to steer Croatia to its first Davis Cup final. It was effectively a two-man team, but they needed two back-up players in the final. By then Ivanisevic was playing largely exhibition events, but he got himself into shape, and was the fourth man behind Ljubicic, Ancic and Ivo Karlovic. With Ancic beating Slovakia’s Michal Mertinak in a live fifth match, Croatia won the biggest team trophy in tennis, and Ivanisevic got the Davis Cup winner’s replica that he might have had in 1991 if Yugoslavia had stayed intact.

Stints as coach to Head players Novak Djokovic and Marin Cilic kept his profile high after he finished playing, and these days the greying, bearded figure looks very calm and distinguished. Only those who saw him play will remember the wild child who could delight and frustrate a tennis crowd in equal measure.