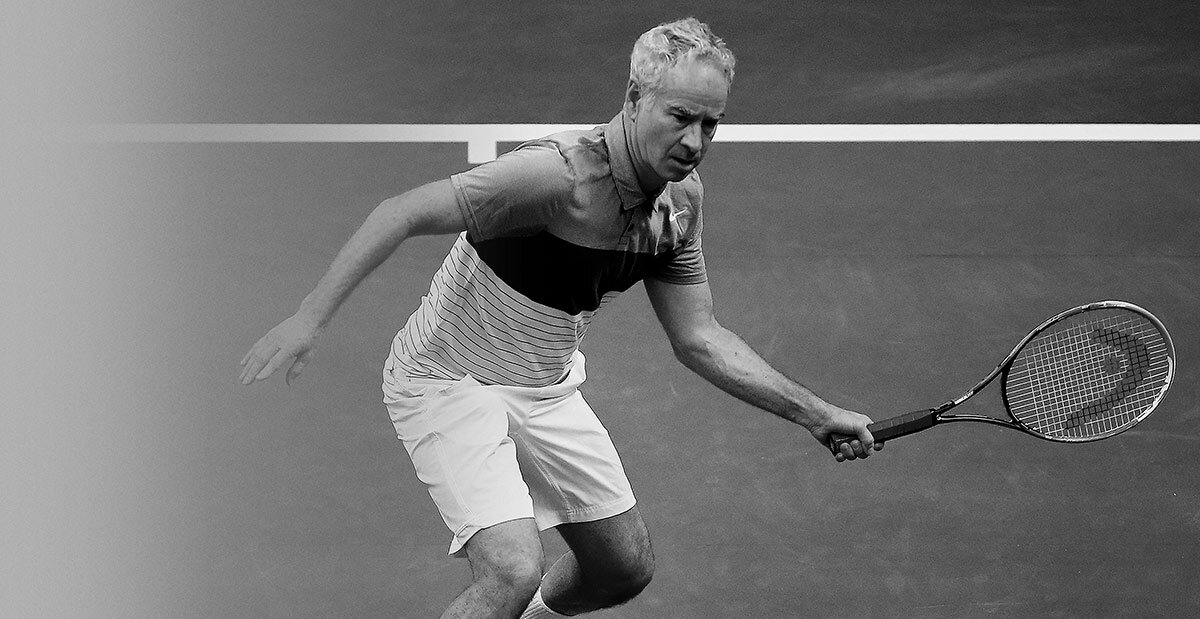 Everybody in the world knows John McEnroe, one of the biggest tennis legends of all time. During the early 80s, especially from 1981 to 1984, he could have been considered as almost unbeatable. When he retired in 1992, he looked back to a career filled with uncountable victories on the Tennis Tour. 170 weeks as World Number 1, 77 single titles (thereof 7 majors), 72 double titles and 877 wins over just 198 losses - figures which impressively prove his fabulous career as tennis player.

The tennis writer and historian Richard Evans first met John McEnroe when the New Yorker was 18. Evans recently caught up with the 61-year-old McEnroe during the coronavirus lockdown, and says McEnroe’s fire burns as brightly as ever.

Many who watch Seniors’ tennis marvel at how John McEnroe can still hold his own with power players two decades younger. The answer lies in his fitness, helped by a racket that gives him extra power without taking away some of the greatest subtlety ever seen on a tennis court.

When I first met John, he was a not terribly fit 18-year-old with pudgy thighs, and I have no doubt that he has been in better physical shape over the past three decades than he was in his halcyon years. At his peak, he won three Wimbledons, four US Opens and four Davis Cups without having to be as fit as today’s top players are.

When that brilliant but chequered career finally came to an end in 1994, he had a major change of mind about what he was going to do next. In his playing days, he had always scoffed at suggestions he might play Seniors tennis in his later years but, as some of us suspected, the competitive urge was too strong and, anyway, he just loves the game.

But he needed to get fit, so he had a full gym, complete with a wall-climber, installed at the Malibu house he owned at the time, and if it could be said that the New Yorker’s temperament had him climbing walls in fiery days on court, he decided to take it literally in his bid for fitness in his thirties.

Now, he still prances about court like someone half his age – at least he did earlier this year before the pandemic forced a suspension of all tennis tours. Indeed, one of his opponents, Tommy Haas, the former world No 2 who still plays on the main ATP tour, is 19 years younger, but the age difference seemed immaterial as Haas struggled to deal with the delicate volleys that McEnroe produced behind that swinging left handed serve which still takes his opponent way out of the ad court – just as it always did. Haas won this particular duel but he was pushed to a tiebreak before he could do it and the ‘old man’ was no less competitive when he played the giant Aussie Mark Phillippoussis, 18 years his junior, the next day.

Jim Courier, the former Australian and French Open champion who runs the Legends tour, has ceased to be surprised by McEnroe’s ability to defy the passing years. ‘I have probably played John more than anyone, in practice or in matches and I still can’t read his serve!’ says Courier with a hint despair. ‘With John it’s about geometry more than power, although his Head racket has given him a bit more of it. He cuts off angles and hits with such precision. He’s still got great reaction, good feet and with that deep shoulder turn on the serve he has total disguise.’

McEnroe, a New Yorker born and bred, found himself a continent away from his spacious Fifth Avenue apartment when the world started closing down at the beginning of March. ‘Everyone expected the BNP Paribas Open to be played at Indian Wells and I was due to play a couple of exhibition matches,’ McEnroe said. ‘Then a day before the tournament was due to start they cancelled it, and we decided to stay in California. Two of our daughters are with us and two others don’t live far away so we’ve been lucky.’

It meant that, throughout the spring and hot summer of the pandemic, McEnroe woke up to the rhythmical sounds of the Pacific waves lapping onto Malibu Beach just outside his bedroom window. For years, McEnroe has had a house, or sometimes two, in the movie star enclave known as The Colony where strollers on the beach can peer over the little fences into sandy gardens where the likes of Leonardi DiCaprio or Halle Berry take their morning coffee surprisingly unmolested.

Another factor making life as amenable as possible for McEnroe has been the proximity of the Malibu Tennis Club, a five minute drive away, nestled in the hills across the Pacific Highway. The club is owned by Oracle founder Larry Ellison, who also owns the Indian Wells Tennis Garden and is run by the former ATP touring pro Trey Waltke.

‘It is very convenient and I go up to have a hit most days although my ankle is playing up and restricting my movement a bit,’ McEnroe says with a hint of frustration in his voice. He will always have his television career, but his need to keep competitive offers another way to burn off the excess nervous energy that has always been part of his personality.

The legends have six tournaments still on their schedule for the rest of 2020 which they hope to play, probably without crowds in California and Orlando, Florida. Although ranked 13th on the current legends ranking which is headed by Haas and James Blake, McEnroe hopes to resume his role as one of the tour’s top attractions.

There is no doubt that a switch to the Head Radical in September 2015 helped McEnroe remain competitive on the Legends tour. Courier is right in saying it’s precision and placement which make McEnroe unique for his age, but he also needs to respond to the power of a Haas or a Philippoussis and the Radical helps him do that.

‘It was never quite the same,’ says McEnroe. ‘It was Björn Borg introducing me to Head’s CEO Johan Eliasch that led me to Head. I got to know Johan pretty well and he suggested I join the company. Glad I did. The Radical is their most flexible frame which enables me to keep some subtlety in my game while adding power.’

So the storied career of John McEnroe is not over. And as long as that serve continues to confound the likes of Jim Courier it will probably continue for a while yet.