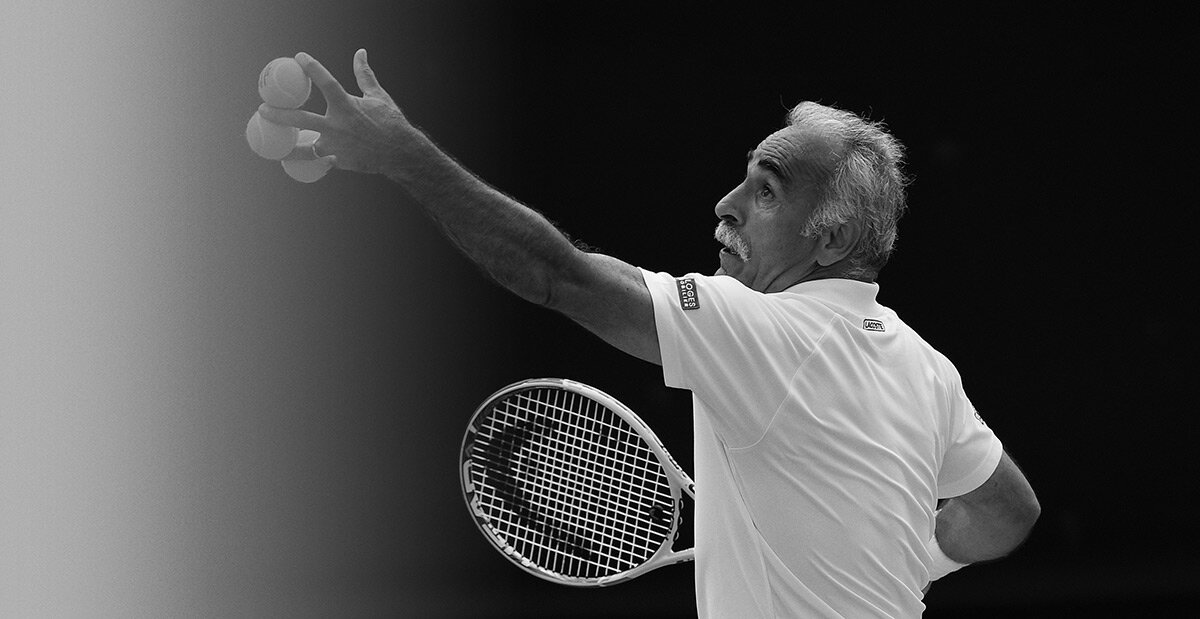 Mansour Bahrami has a striking talent - the connection of humor and unbelievable tennis skills. The biggest tournaments on the ATP tour rely on him entertaining all kind of spectators and Bahrami always delivers. He masters trick shots in combination with being humorous in the same time which made him the most famous tennis entertainer on the planet.

Mansour Bahrami is tennis’s primary entertainer. His chances of being a top singles player were thwarted by turbulent events in his native Iran, as he tells veteran journalist Richard Evans, who himself is part of the Bahrami story.

When Mansour Bahrami and I run into each other at tournaments, we often laugh at the thought of what would have happened if I had not turned up at Cairo airport in 1976 to get him out of jail.

The Iranian who has enjoyed a long and extraordinary career, had already been lingering in the airport prison for three days when I arrived from Khartoum, where I was helping to run an ATP tournament. I carried with me a vital document – a Yellow Fever certificate with Mansour’s name on it. He had left Sudan without the required document and had been arrested immediately on arrival in Cairo.

I think I used the art of friendly persuasion rather than an outright bribe on a friendly Sudanese doctor to get the certificate before flying up to Cairo, so I was well equipped when the Egyptian immigration official looked down his list of detainees and said, ‘Ah yes, Bahrami. Do you want him?’

‘Yes, please,’ I said quickly, and within a few minutes a remarkably unruffled Mansour appeared, picked up his tennis bag and went straight off to the Ghezira Club to practise. He needed to stretch his legs.

Bahrami was still playing under the Iranian flag at that time, but all that changed three years later when, in 1979, the Shah was ousted and tennis was banned by the new Islamic regime in Tehran which considered it an American capitalist sport.

‘I didn’t know what I was going to do,’ Bahrami told me when we recalled those dramatic days in Iran’s history in a recent phone conversation. ‘But I had a friend called Reza who knew someone high up in the Iranian Government, and I got a visa to travel to France and Switzerland.’

So in 1980, leaving his family behind, Bahrami fled to Paris, speaking only English and Farsi. A year later, at 11.51 on 31 December 1981 to be precise, fate took hold of his life. Turning onto the Champs Elysees, he got stuck in the inevitable New Year’s Eve traffic jam. ‘I didn’t know what to do,’ he recalled. ‘But I noticed this nice looking girl stuck in her car right next to me. So I leaned across and asked her if she spoke English. Luckily, she did.’

Thirty eight years later they are still married and Mansour and the beautiful Frederique have two sons. The second one, Antoine, now 31, was born by weird coincidence in the same ward of the same hospital at the same hour as one of Guy Forget’s children. The French tennis family stays close.

Anyone meeting Mansour will quickly discover that his skills extend further than an ability to make a tennis balls sit up and talk. Imbued with charm and a ready smile, his tongue was quick enough to chat up that girl in a traffic jam on the Champs Elysees and get her to marry him.

It took Bahrami a little longer to get established as a tour player, restricted as he was to playing in France until 1986 when he finally got his Carte de Sejour (equivalent of a residence permit or Green Card). ‘So I was able to play local tournaments, which is never a problem in France because they happen every week and have a little bit of prize money too,’ he explained. ‘And I couldn’t go anywhere anyway because the Iran hostage crisis blew up and my visa was cancelled.’

He played well enough to catch the eye of the legendary French official Jacques Dorfman, who got him a wild card for pre-qualifying into Roland Garros. The opening was there and Bahrami grabbed it. ‘I had to make the wild card work and I did, beating Jean-Louis Haillet to get into the main draw.’

But it was not easy. The American he lost to called him ‘an Iranian asshole’ at courtside. ‘But he came up to me later and apologised, saying that other players had told him I was an OK guy.”

By then it was obvious Bahrami had special racket skills as well as a big first serve and he was soon beating all the best French players of his generation like Forget, Thierry Tulasne and Pascale Portes.  ‘Except Yannick (Noah),’ he laughed. ‘I could never beat Yannick.’

But it was on the doubles court that Mansour found his true métier. In 1986 he reached the final of the first Paris indoors tournament at Bercy partnering Uruguay’s Diego Perez; they lost to John McEnroe and Peter Fleming. The next year he made it to the final of Monte Carlo with the Dane, Michael Mortensen. Then in 1988 he won his first ATP doubles title in Geneva with the Czech Tomas Smid, and the following year a second, Toulouse, with Eric Winogradsky of France. By then he and the tall Winogradsky had made it all the way to the 1989 Roland Garros final where they lost in four sets to Jim Grabb and Patrick McEnroe.

I have been with Head ever since and just love the racket. It has improved my game because it has enabled me to keep my touch but the extra power helps me to keep serving at 200 km/h – even at 64!’

Throughout this time, Bahrami had been using a Kennex racket but Head came calling in 1999 with an offer to buy out his Kennex contract. ‘At first I said no, let the contract run its course because I felt a loyalty to Kennex,’ he explained. ‘But suddenly Kennex went out of business so the problem was solved. I have been with Head ever since and just love the racket. It has improved my game because it has enabled me to keep my touch but the extra power helps me to keep serving at 200 km/h – even at 64!’

As the years rolled by, Bahrami’s reputation grew as his amazing skills and trickery made him the star of various seniors tours that sprung up, especially the one organised by Jimmy Connors that was so successful in America for several years. And there were the one-night exhibitions with the game’s other clown, Ilie Nastase, which drew packed houses all over France.

Playing volleys behind his back, fake first serves, returning smashes with lobs played as he sat crossed legged in the line judge’s chair, nudged volleys and sudden explosions of power – crowds are engulfed in hysterical laughter when the man dubbed as  the game’s Court Jester unravels his full repertoire of skills.

Fierce arguments with umpires are played out, with the big moustache concealing a little smile and no one takes offense because, when all is said and done, it is Mansour’s innate charm that has carried him so far. Ask Frederique.