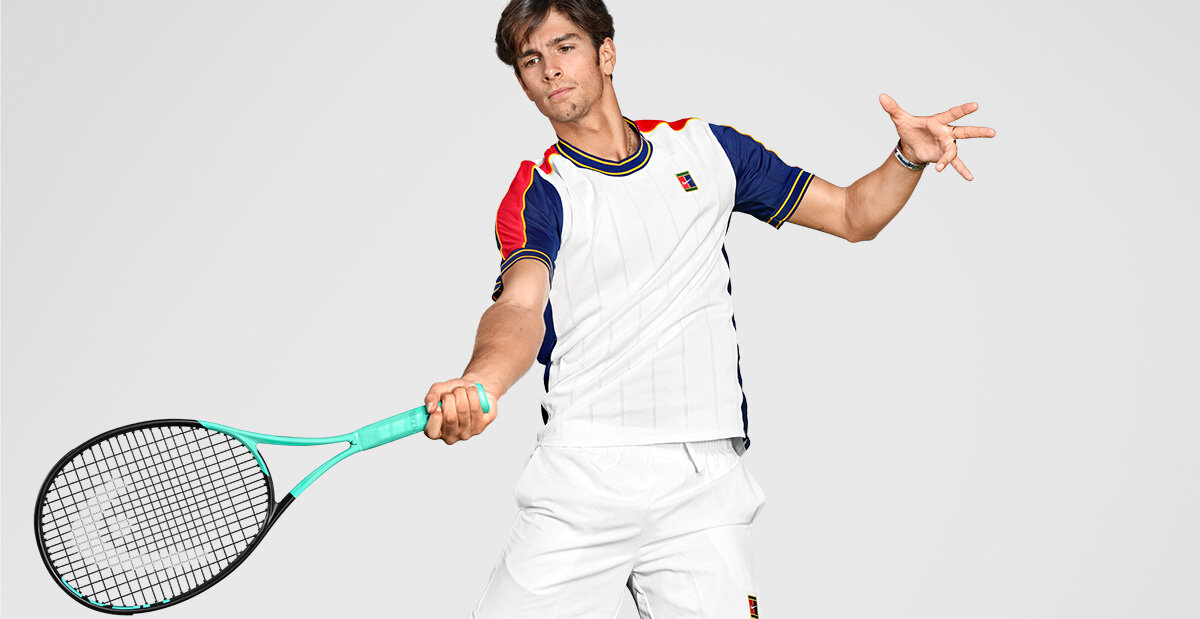 It’s more than four decades since an Italian man won a Grand Slam title, but an exciting generation of Italian male players is emerging, all with Head rackets. Matteo Berrettini and Jannik Sinner are already well established, but many think Lorenzo Musetti could be the best of the trio.

When Lorenzo Musetti beat Stan Wawrinka and Kei Nishikori to reach the third round of the Rome Masters in September 2020, the world sat up and took notice. When he went on to win a Challenger tournament in Forli two weeks later, the world wasn’t watching as it was consumed by Roland Garros – but the result was noted.

The former world junior number one had never beaten a top 100 opponent before – and now he did so in six out of seven matches. All while still only 18.

Musetti may still have some physical strengthening to do, but the mental capacities of the former Australian Open boys’ title winner are expanding fast. He learns imaginatively and determinedly. Enhanced perspectives are marrying up with an inner steel.

More visible to spectators is a watchable style of play with plenty of variation. Musetti’s capacity for developing such qualities has already caught the attention of the modern legends – Roger Federer, Rafael Nadal and Novak Djokovic.

While training, with Djokovic he benefited from the cosmopolitan virtues of the 17-times Grand Slam champion from Serbia. ‘Novak speaks Italian really well, so we could communicate in my language,’ Musetti said. ‘But the practice goal was not to receive advice or anything like that, just to enjoy it.’

He knew how to do this. He had learned with Nadal, the 20-times Grand Slam winner with whom he practised incessantly. ‘The compliments of Nadal, who was very humble and calm in giving them, made me very happy,’ he acknowledged.

You might expect Musetti to have modelled his backhand on Nadal’s fierce double-hander, but he hasn’t. There is a highly influential reason: the style and grace of Roger Federer.

Federer, also a 20-times Grand Slam title winner, is Musetti’s greatest hero, both for his character and his elegantly brilliant game; for a calm and principled approach and a classic one-handed style. From early days, the young Italian tried to emulate this, and even Nadal praised how well Musetti has done so.

And he revelled in practising with Federer. ‘The first time I played on Rod Laver Arena I warmed up with him. He is my idol,’ Musetti declared. ‘It was a really intense 30-minute session – it was not easy to play against him!’

Working with such a trio would turn many heads and bloat a few egos, but not Musetti’s. ‘All this attention does not make me go crazy,’ he said. ‘On the contrary it just motivates me.’

The origins of his 2020 advances came, perversely, during the Covid-19 pandemic.

‘I stopped tennis for one month,’ he says. ‘And in quarantine I trained every day. After resting I had more energy and more power. I wanted to come back with full power – and I did.’

Returning to competition brought landmarks – the victory against Wawrinka in the Rome Masters which made him the first player born in 2002 to win an ATP match, followed up with a win over Kei Nishikori, another recent top tenner.

The elevated form continued only 170 miles from home, at the Challenger tournament in Forli. There he recovered from a final set deficit to overcome the top-seeded American Frances Tiafoe 6-4 5-7 6-2, then beat the former top-20 player Andreas Seppi, and followed it with wins over Lloyd Harris and Thiago Monteiro.

Musetti’s steadily enhanced capacity for analysis and adaptation may prove a central skill in his rise up the rankings. Note how he identified phases of the win over Tiafoe. ‘Serving at a high level became key right away,’ he observed. ‘Tiafoe served very well from the start and it was very difficult to break him. However I felt I would have chances during the rallies, and I believe I won almost all the longer points. This was reassuring. Even after losing the second set and falling behind by a break in the third I had a very positive reaction. I went up a gear and began dictating with my forehand.’

There now seems widespread agreement that Musetti’s future is bright. Training with the legends reveals a powerful eagerness to learn – and now, it is said, fans have started looking for the great player in him.

The one-handed backhand looks good. So do dextrous hands at the net. And the brain and the temperament. His movement is excellent too; his height of 1.85 metres (6ft 1in) is ideal, and if he fills out he should get stronger.

There are reported to have been shoulder strains, though these are not uncommon in an 18-year-old with his record. Careful management could in time facilitate extra weight on the first serve.

Further skills are needed to adapt to different surfaces. Musetti’s results on hard courts are not quite as good as those on clay, at least not yet. Will he become good enough on grass? It’s too early to say. Once it was suggested Nadal never would, but it happened, even if it took a while.