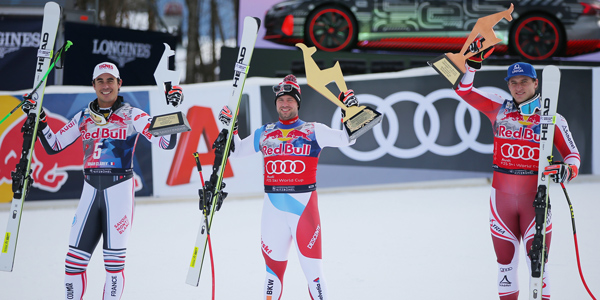 HEAD wins all three races on the Streif run in Kitzbühel

The HEAD World Cup Rebels dominated the action on the Streif in Kitzbühel: In a spectacular Downhill event on Friday, the HEAD World Cup Rebels celebrated a double victory with Beat Feuz and Matthias Mayer. For Feuz it was his first victory in a Hahnenkamm Downhill in his career following four finishes in second place. That result was topped in the second Downhill race on Sunday with triple success by Beat Feuz, Johan Clarey and Matthias Mayer. And then it was Vincent Kriechmayr winning the Super-G on Monday who rounded off a flawless HEAD weekend in Kitzbühel. On top of that, Lara Gut-Behrami won the Super-G in Crans Montana on Sunday with a lead of almost one second.

"I'm proud of the way I skied. It was a difficult race, and with the two crashes and interruptions it was a long one too. It was also relatively fast, so it wasn't easy to adapt quickly," explained Beat Feuz following his first victory on the Streif run on Friday. For the Swiss athlete it was his 14th World Cup victory, the eleventh in the Downhill. Matthias Mayer was pleased to finish in second place.

"The triple victory on Sunday was of course the absolute highlight for us," said HEAD Racing Director Rainer Salzgeber. "We've never had that before and it's something historic for HEAD that will stand out for a long time. Friday was a special event on its own with the long awaited Golden Chamois for Beat Feuz, especially following concerns about stopping the race. I'm also pleased that Vincent Kriechmayr finally bagged a victory. The good thing was that both he and his service man stayed calm and weren't put off by advice coming from all sides. That was a big reason why everything went so well. All of us in the team have stood behind the strategy, even when things haven't turned out quite as well. Everyone kept their cool and focused on getting the job done."

Equipment from the Winning Podium

On Sunday Beat Feuz was once again unbeatable in the second Downhill event in Kitzbühel. The 33-year-old won 17 and 38 hundredths of a second ahead of his HEAD colleagues Johan Clarey and Matthias Mayer, also taking the lead in the Downhill World Cup - in front of Matthias Mayer and Johan Clarey. Johan Clarey set a record with his second place. At the age of 40 and 16 days, he is the oldest ski athlete ever to stand on a World Cup podium. HEAD continued from one success to the next in Kitzbühel on Monday. Vincent Kriechmayr bagged the win in the Super-G for his first Golden Chamois. For the Austrian athlete it was his seventh World Cup victory, the fifth in a Super-G.

The women athletes had two Downhill races and a Super-G on the agenda in Crans Montana this weekend. In Sunday's Super-G, Lara Gut-Behrami was in a class of her own. The Swiss athlete won with a lead of almost one second.