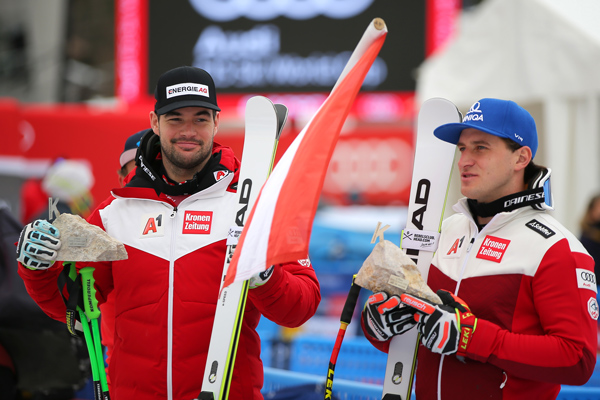 The last two races before the World Championships in Cortina were held in Garmisch-Partenkirchen this weekend. Austria's speed rebels Vincent Kriechmayr and Matthias Mayer sealed a HEAD double victory in the Super-G on Saturday. In the Downhill on Friday, two HEAD World Cup Rebels also raced to podium finishes with Beat Feuz in second place and Matthias Mayer third.

Following his victory in the Super-G in Kitzbühel, Vincent Kriechmayr clocked yet another win in this discipline in Garmisch. With this success, his eighth World Cup victory and sixth in the Super-G, the Austrian extended his lead in the Super-G World Cup with 341 points. Matthias Mayer is just behind him in second place with 240 points.

"The lead up to the World Championships has been very positive," says HEAD Racing Director Rainer Salzgeber. "Our performance in the last few races has been really good. These athletes are well placed among the favourites for Cortina. But they are experienced lads and know how to handle a bit of pressure. I am hoping we will have fair conditions from the beginning. The weather could still present a bit of a challenge. But we have done a good job with our preparations. We will use the remaining time before the World Championships for some final tests. Maybe we can fine-tune a couple of more things."

For Beat Feuz, Friday's Downhill saw him race to his fourth podium finish this season in this discipline, following his double victory in Kitzbühel and his third place in Val Gardena. This means that the Swiss athlete will enter the World Championships as the leader in the Downhill World Cup with 406 points. Matthias Mayer is in second place having notched up 358 points in this discipline.