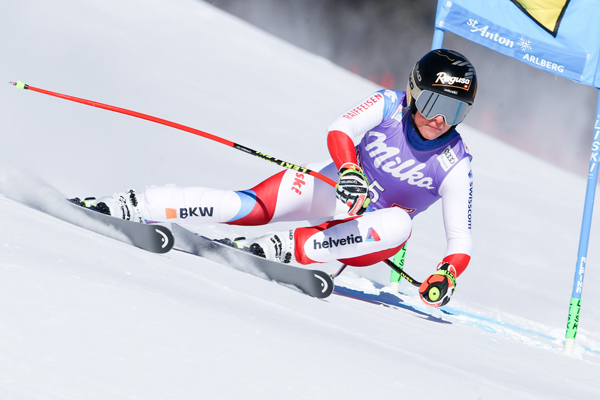 The Giant Slalom doesn't get much better than this. Alexis Pinturault won both races on Friday and Saturday in impressive style on the Chuenisbärgli run in Adelboden. He clocked the fastest time three times and the second-fastest once. In St Anton, Lara Gut-Behrami bagged her first Super-G win since January 2018, and Corinne Suter finished third.

"I risked everything and skied very well. On Saturday, the light made it difficult on the second run. But my performance was very good on both days," said the French athlete at the finish. "We've worked hard with HEAD, and that's paying off now." This is the 33rd World Cup victory for the HEAD World Cup Rebel, his 17th in the Giant Slalom. With 440 points, the 29-year-old has now also taken the lead in the Giant Slalom World Cup. Finishing 17th in Sunday's Slalom, Alexis Pinturault also leads the overall World Cup ranking table with 689 points.

"The first few races this season weren't bad, but they weren't ideal either. We've been working on tuning. In Alta Badia Alexis was using new skis. We have also made changes to the plate and binding system," explains HEAD Racing Director Rainer Salzgeber.

In the Giant Slalom on Friday Alexis Pinturault nailed the competition with the two fastest times. Justin Murisier from Switzerland finished in fifth place, Tommy Ford from the USA was tenth and Fabian Wilkens Solheim from Norway 13th. In the second Giant Slalom on Saturday, Alexis Pinturault was in second place after the first run. He put on a dazzling performance in the snow on the second run and finished 1.26 seconds in front of Filip Zubcic.

The women's races were in St. Anton with a Downhill competition on Saturday and a Super-G on Sunday. In the Super-G, Lara Gut-Behrami returned to her winning form in this discipline as well. The Swiss athlete last won the Super-G in Cortina d'Ampezzo in January 2018. This weekend's win was the 27th World Cup victory overall for the 29-year-old, and her 13th in the Super-G. With this success, Lara Gut-Behrami also took the lead in the discipline ranking with 145 points. The HEAD World Cup Rebels' tally in St. Anton was rounded up by Corinne Suter from Switzerland in third place. Ariane Rädler from Austria was able to celebrate her first top ten result in the World Cup by finishing in seventh place. In the Downhill event, Laura Pirovano finished in fifth place - her best World Cup result so far.