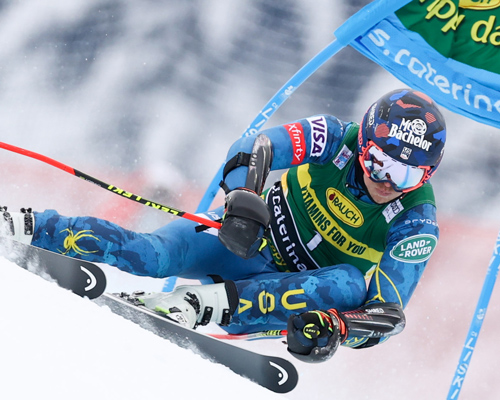 Tommy Ford races seamlessly into continuing the successes of last season. The US athlete bagged a place on the podium in the second Giant Slalom in Santa Caterina on Monday with a new model of ski, finishing second behind Marco Odermatt from Switzerland. For Ford it was the third World Cup podium finish in his career - following his first victory in December 2019 in the Giant Slalom in Beaver Creek and third place in the Giant Slalom in Japan in February 2020.

"This is a cool result. I didn't think I was going to be able to ski that fast," explained Tommy Ford. "My injury prevented me from skiing as much as I would have liked over the summer. But I had a good training camp in Copper. I have also worked a lot with my mental coach, who has helped me a lot over the past four years, especially in finding my self-confidence."

Alexis Pinturault finished in fifth place. With 240 points the French athlete shares the lead overall in the World Cup with Marco Odermatt. Alexander Schmid from Germany again delivered a top result in ninth place - after his third place in the Parallel Slalom in Lech/Zürs. European Cup overall winner Atle Lie McGrath was pleased with his best World Cup result so far. The Norwegian athlete finished eleventh, having clocked the second-fastest time on the second run.

In the Giant Slalom on Saturday, Alexis Pinturault again finished fifth. After the first run he was in third place. Tommy Ford came in behind Pinturault in sixth place. Mathieu Faivre from France was the third HEAD World Cup Rebel in the top-ten, finishing in eighth place. Alexander Schmid finished in eleventh place, Atle McGrath in 15th place. The US athlete Ted Ligety, who finished in 19th place, Justin Murisier in 25th and Samu Torsti from Finland in 27th place also picked up valuable points.