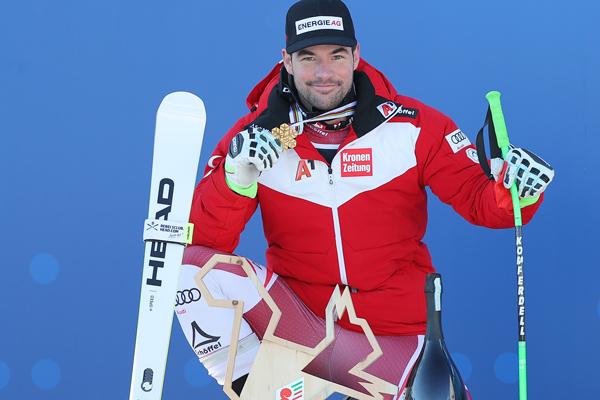 "That was a very special result for us today. The favourites delivering results like that does not go without saying. Both Lara Gut-Behrami and Vincent Kriechmayr are on top form. The fine-tuning we did before the events today was very successful, because the skis the athletes wanted to use could maintain the speed on the flatter sections of the run. Vincent Kriechmayr was really cool. He had little information to go on from competitors that started before him. Luckily it worked out so well for him," said HEAD Racing Director Rainer Salzgeber. "Corinne Suter also skied an awesome race. The course was technically demanding. Kajsa Vickhoff Lie finishing in fifth place and Marie-Michele Gagnon in sixth place were also super results."

Lara Gut-Behrami has already notched up 30 World Cup victories during her career. But the 29-year-old had yet to win a Gold medal at a World Championship. Her time came at the first competition of the World Championships in Cortina. Following four World Cup victories in a row in this discipline, she continued her run of success in Cortina. "I was quite nervous and just wanted to ski the best I can. That was the difference compared to my strategy in the past. I didn't dream of the Gold medal, I just wanted to show what I can do and that careers are not only measured in Gold medals. I thought at the start that if someone had asked me years ago to choose between 30 victories in the World Cup or a World Championship Gold medal, I would have chosen the 30 victories," Lara Gut-Behrami explained at the finish. "I was surprised by the snow, it was slower and not as difficult to ski as I imagined. There were already tracks on the run by the time I started. I thought I could take advantage of them, but it didn't work out that way. It's also good that they postponed the race until today. When the sun shines in Cortina, it's beautiful. This makes skiing so much more fun."

Silver also went to the HEAD World Cup Rebels thanks to Corinne Suter's brilliant run in this first competition. For the Swiss athlete it was her third World Championship medal - following Silver in the Downhill and Bronze in the Super-G at the 2019 World Championships in Aare. "I really made the most of my strengths today. While checking out the course before the race I could see that you have to carry the speed with you and make sure it lasts until the finish. I've not had an easy time recently, with inconsistent results. I am very proud that I was able to bring on my performance at the World Championships," said the Swiss athlete happily.

100-meter drift to the Gold medal

The men's Super-G that followed was spectacular thanks to a particularly challenging section on the upper part of the run. Vincent Kriechmayr, winner of the Super-G events in Kitzbühel and Garmisch, didn't let this unnerve him and crossed the finish line with the fastest time. "I was watching the bib numbers 1, 2 and 3 from the start, but they all dropped out on this section of the run. So it wasn't an easy situation. I figured I'd have to drift through it and hope it worked out somehow. It's the first time I have ever put in a 100-meter drift like that. That's what makes this sport so special; you have to improvise now and again in the Super-G. In the end I did very well," said the Austrian athlete.

Alexis Pinturault also brought on a top performance in the first race of this World Championships. The French athlete added Bronze to his four World Championship medals so far. "The run was very challenging and complicated today, you had to ski it intelligently. In the Super-G you always have to attack full-on. It was very close, but I'm very happy to be on the podium in the Super-G," said Alexis Pinturault.